elringtons has secured $12 million in compensation for a client in a medical negligence matter against a GP, Neurologist and a Canberra Hospital.

Our client was a sufferer of migraines since her early teens.  She had been treated for many years with a drug called Deseril.  When she was first prescribed this drug by a Neurologist, she had a break from Deseril for 1 month every 6 months. The break was recommended by the manufacturer of the drug. This was called a ‘Deseril holiday’. The holiday was required as continued use of Deseril was known to cause circulatory problems. The Neurologist and our client’s GP prescribed Deseril, with holidays, as required.

In October 2011, our client developed visual disturbances and had difficulty walking. She presented to the emergency department and was admitted for several hours.  She was ultimately discharged home with a diagnosis of migraine, despite having no pain and advising these were not her usual symptoms.  Our client told the hospital she was taking Deseril, but no one asked when her last holiday was.

Over the following week our client’s symptoms continued, deteriorating to the point she had to return to hospital.  She was admitted and unfortunately had a stroke which caused catastrophic injuries which left our client with quadriplegia.  She was continually given Deseril, even after the stroke, as the link was not made between her stroke and the Deseril until several days following her stroke. Our client was subsequently hospitalised for 9 months for intense treatment and rehabilitation.

Incredibly, the gold standard on medication administration used by doctors and hospital staff, known as MIMS, indicated that a holiday from Deseril was required. This guide was in the hospital and readily available to doctors, nurses and pharmacists on both occasions when our client went to hospital.

Allegations of negligence were raised by Elringtons against the GP, the Neurologist and the Hospital.  Unfortunately the matter was required to proceed to hearing at the ACT Supreme Court, being set down for 4 weeks.  The matter settled after 5 days of hearing, after our client and her family had given evidence, and expert evidence was given by neurologists.

The tragic circumstances have left our client with permanent injuries.  While no sum of compensation can turn back the clock, the award will fund much needed modifications and equipment, as well as subsidising around the clock care that she requires.

Our client hopes her matter will be a lesson for all people taking medications to inform yourself as much as possible about the medication and to discuss this with your doctor.  For a link to a Canberra Times article on the matter, as well as more details of our client’s public statement, please follow this link: http://www.canberratimes.com.au/act-news/calwell-woman-settles-lawsuit-against-canberra-hospital-doctors-for-12m-20170213-gubllt.html. 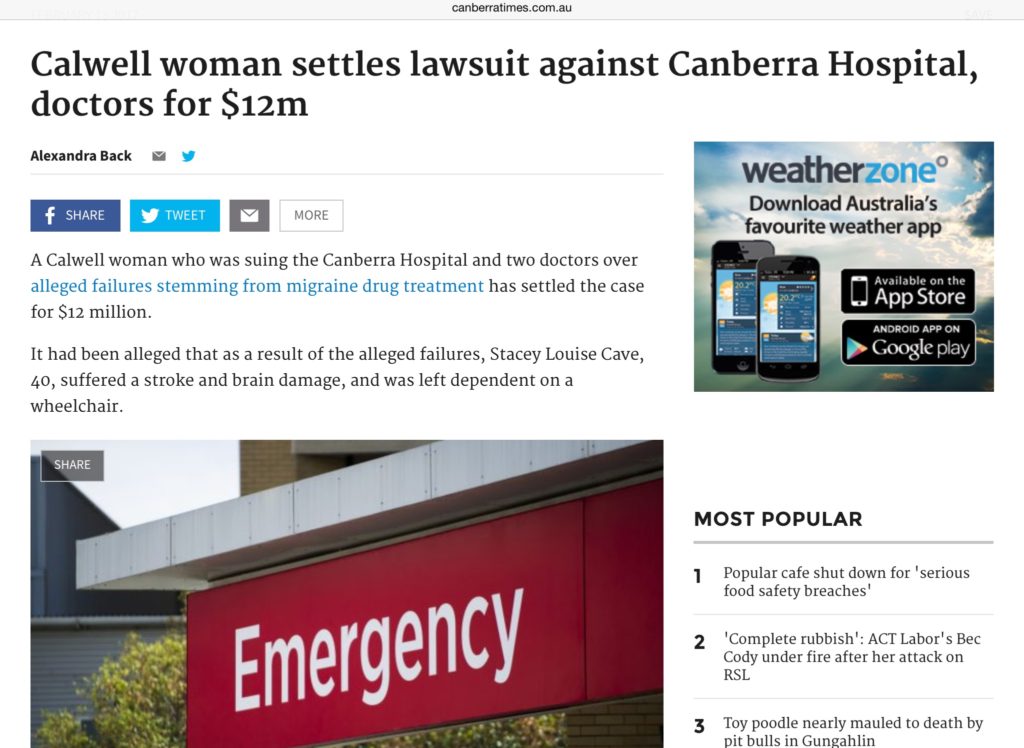 The vast majority of medical treatment is performed competently.  Sometimes however things do not go right, things you may not have expected to occur or should not have occurred if treatment was competently given.  If this occurs it is important that you seek further treatment.  Rectifying the problem and modifying your life as a result of the problem can be very costly.  You don’t want to be the one left with the bill, now or in 10 years.

Matthew Bridger has over 25 years experience in medical negligence matters.  His legal expertise and medical knowledge mean that he ‘just gets it’.  Matt is assisted on all matters by Tom Maling, who was previously a Registered Nurse.  Matt or Tom are available at all times to talk with you about your problems.